Well I tried it and discovered it's not for me.  I was super excited about it but should have known it would be too dark for my liking.  I waxed 2 pieces of indian corn and I just hate the way it took away from the natural beauty. 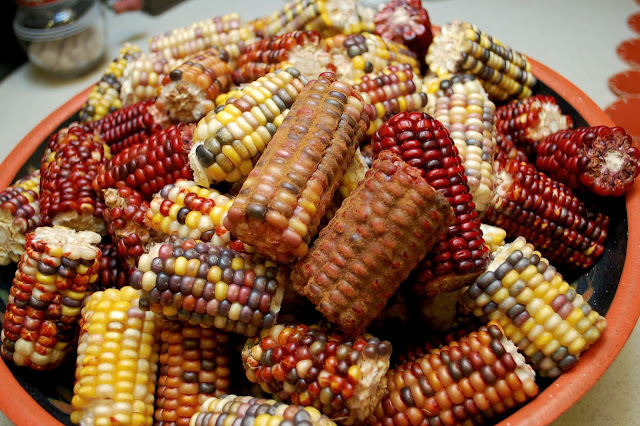 I'm gonna scrape that wax off.  The whole time I was cutting up the corn I kept thinking how pretty it is and how it's going to be so hard to sell it, being the fall lover that I am.  Now I'm excited that I've decided to keep it all, lol! 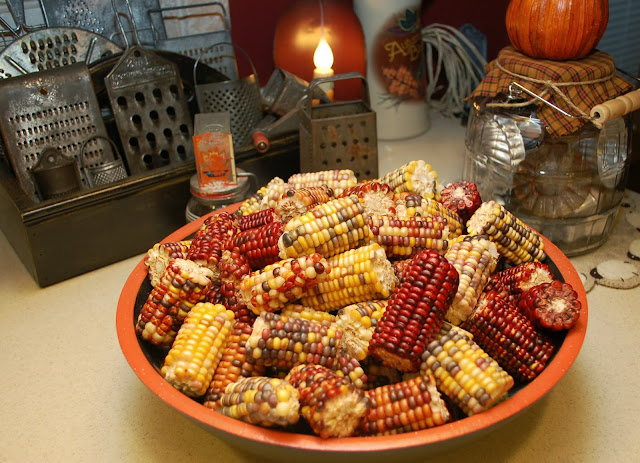 I gotta tell you about my little man.  Robbie smelled the cinnamon and came into the kitchen to see what I was making.  He said "Oooh, can I help you?".  He sure loves to help with anything.  Robbie was helping me dip the corn into the wax.  I told him that I didn't like it all and was disappointed in how it turned out.  He asked me if I was doing it right, ha!  He ran and got his "phone" (his sister's old phone) and googled 'how to wax corn', lol!  Pretty smart thinking for a 7 year old.  Scrolling through the phone looking for an answer, he finally gave up and asked me why I wanted it waxed anyway.  I explained to him that it was primitive looking, old looking and I like things that are old and remind me of my grandma.  The wheels were turning in his little mind, you could just see it in his facial expression.  Then he pipes up and said "You mean like that one tv show where the guys take old stuff and make it look new again, only you take new stuff and make it look old again?"  I love all my kids equally but this one really makes me smile a lot, he's always thinking.

Anyway, we decided that we liked the indian corn better natural so we got the icicles and started waxing them.  The good thing is that I will finally have some ready to sell BEFORE Christmas instead of after this year!  =] 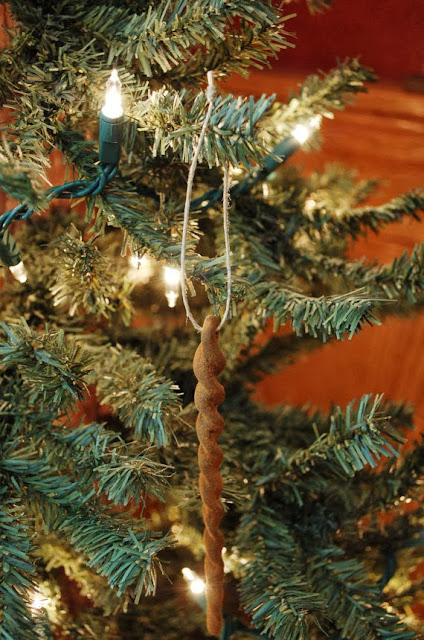 I've decided to only sell them by a baker's dozen from now on.  These have natural twine but the rest will be stained muslin hangers, I believe I like that look the best.

I'm really contemplating doing away with Etsy.  Mainly because it's such a hassle to keep track of what sells elsewhere and in the meantime pray no one bought it off of Etsy, making sure to delete it from the shop as soon as possible.  I created a couple of new pages on my blog and will use this to list my handmades.  Also in LOTS of selling groups on Facebook.  Doing really well there but I'm in so many that I forget what I list where, lol!  Gotta find a system for tracking.

Anyway, that's all that's going on here.  My mom came to stay with us for 9 days, leaving on Labor Day.  We spent the week scrapbooking but running around a lot too.  Rich kept up the laundry and the house picked up for the most part which was sweet of him.  But still SO much to do to get caught up.  As always, I enjoyed her stay so it's been worth a hectic week.

I'm grateful for my family that supports my crafting even though they don't understand it or even try to understand it.  As long as they are there to help out and take care of other things then it doesn't bother me a bit.

Thanks for stopping by friends.  Hopefully I'll get some pictures of fall decorating soon.  Have a delightful week, be a blessing~

The Indian corn is so beautiful! Love your icicles too! Lecia

I love the look of natural Indian Corn...and I too think it took away from the beauty - some things just aren't meant to be changed are they???? That old saying "don't fix what ain't broke"...so true.
I love the icicles though.
Your little guy is very wise - children this age have very little in those tiny brains to fog it all up so everything is clear to them...oh how I wish mine was that clear.
So nice you had all that quality time with your mother - and your husband was very sweet to no this and help out!
Blessings,
Karen

Morning, well, I do love the grungy version too, both are wonderful I think, :) Your icicles are so prim perfect, great idea.....Blessings Francine.

I have to agree with you - Indian corn is much to lovely to cover up!

Hi Angie, I just waxed some indian corn and when I first started I found my wax wasn't hot enough so more stuck to the corn and took away the color. I found if I left the wax get hotter alot ran off and just put a thin glaze on the corn. Then I just lightly rubbed cinnamon on mine. So I have a mix some heavier wax and some not so heavy. I like mine but it is gorgeous with no wax on, I was just ready for a change.

Yours is beautiful as is.

Good call leaving it natural! So pretty in your bowl. I do love the waxed look-use ugly old dried up regular corn Angie! Your little guy is smart-ask him to find a tracking app for selling online! LOL-bet he could! Keep on Creating! ~*~Lisa

I love the Indian corn without the wax too. Your seven year old will help you make lots of money with his wise ideas.
Blessings,
Carol

I have never tried waking corn, but do agree that it looks nice natural. Looking forward to some photos of your Fall decorating :)

Beautiful indian corn! Isn't it cool that it's the colors of fall! Nice to find another blogger in Oklahoma...got to add you to my blog list!
Miss Bloomers

I like the Indian corn natural too. The colors are so pretty! Love those icicles!
Kim

Hard to improve on the colors of nature. I like the Indian corn just as it is -- not to mention it's easier than having to go to all the work of covering it! 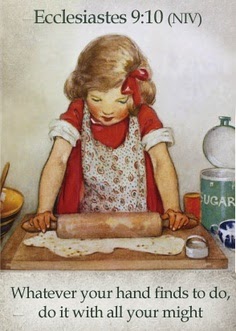 In loving memory of Ophelia Smith & Blanche Goins, my sweet & loving grandmas. I miss you dearly!